"Les bactéries de compagnie" or "the bacteria pets" is a game teaching kids how to design DNA parts. The game is complemented with activities to understand why microorganisms are important, where to find them, and microscope observation. After successfully designing a DNA part, kids will bring home a sticker bearing a picture of the microorganism they created. Project designed in collaboration with Centre Pompidou in the context of Fête du code créatif 2019

Design of the workshop

Design of the game

Design of the game 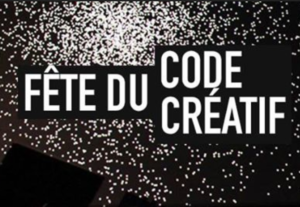 Objectives of the workshop

From the institutional point of view, this workshop was part of the "creative code fair" organized by Pompidou Center. During this time, they invite artists, programmers and scientists to propose math or coding activities to kids. The objective is to show that digital and IT can be used for something creative, beyond the engineering / technical applications that are normally used. Centre Pompidou the opportunity to link this coding activity with the ongoing exhibition on bioart "La fabrique du vivant – Mutations/création 3", which shows many examples on biotechnology used for non conventional purposes. Most of the genes and microorganisms mentioned in the workshop and the DNA game are present and used in the bioart exhibition.

Scientific literacy on DNA and biotechnology

From the educator's point of view, we would like to actively engage the visitors in a very short time, conveying a simple message: microorganisms can be our allies and nowadays we can modify their DNA to produce things that we need. This was not a simple task: visitors only have 15-25 min to pass by out workshop and the range of age goes from 4 to 16 years old, often at the same time. We used very graphical example, and exploited all the five senses to engage the attention of the participants: smell of the bread and vinegar, looking though the microscope, touching the biomaterials...

DNA literacy and biotechnology are crucial to form citizens in our age. News and politicians open debates about questions that require some basic understanding on what is DNA and biotechnology: the legalization of GMO, human or animal gene editing, cancer gene editing therapies...

1. Getting to know the bacterial pets

Understanding the importance of microorganisms for nature and for human activities

Microorganisms are important for many things we use and eat everyday, like beer, wine, bread and cheese. They are also involved in the production of dried sausages, chocolate, olives, sour cream... We start the workshop explaining this to the participants, and observing a few living microorganisms coming from the bakery (baker's yeast blocks) and a big jar of fermented wine becoming vinegar. We ask parents and children if they can guess what's inside the jar (see the picture below with the red-brown jar), giving as a clue that we put bacteria, sugar and water a couple of weeks before. Most of them guess the vinegar smell and learn that microbes produce ALL the vinegar we use everyday in our salad dressings.

Observing microorganisms in the microscope 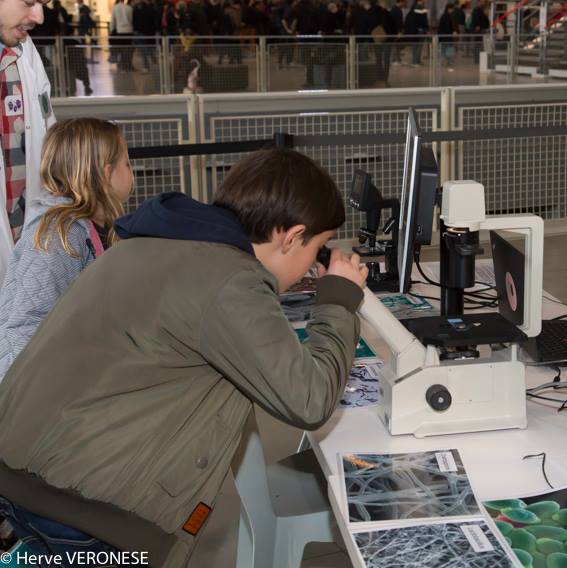 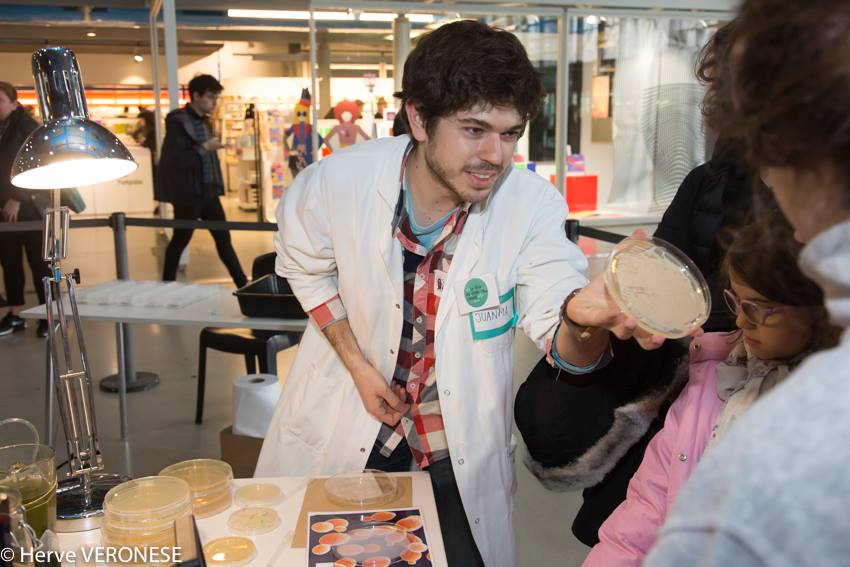 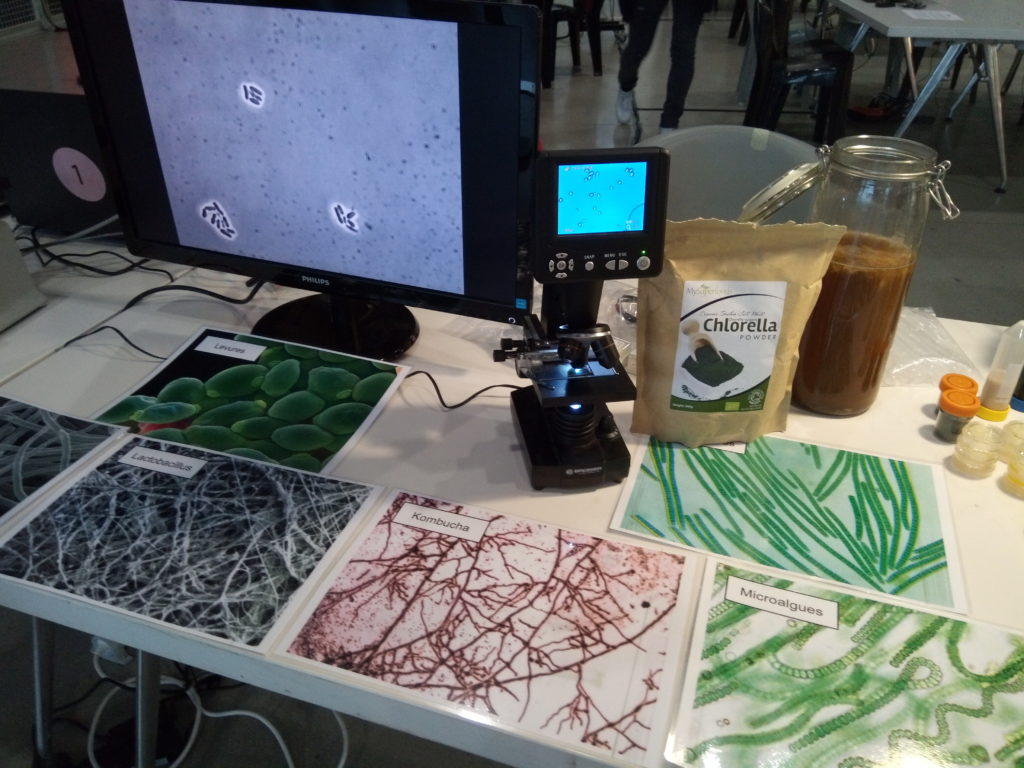 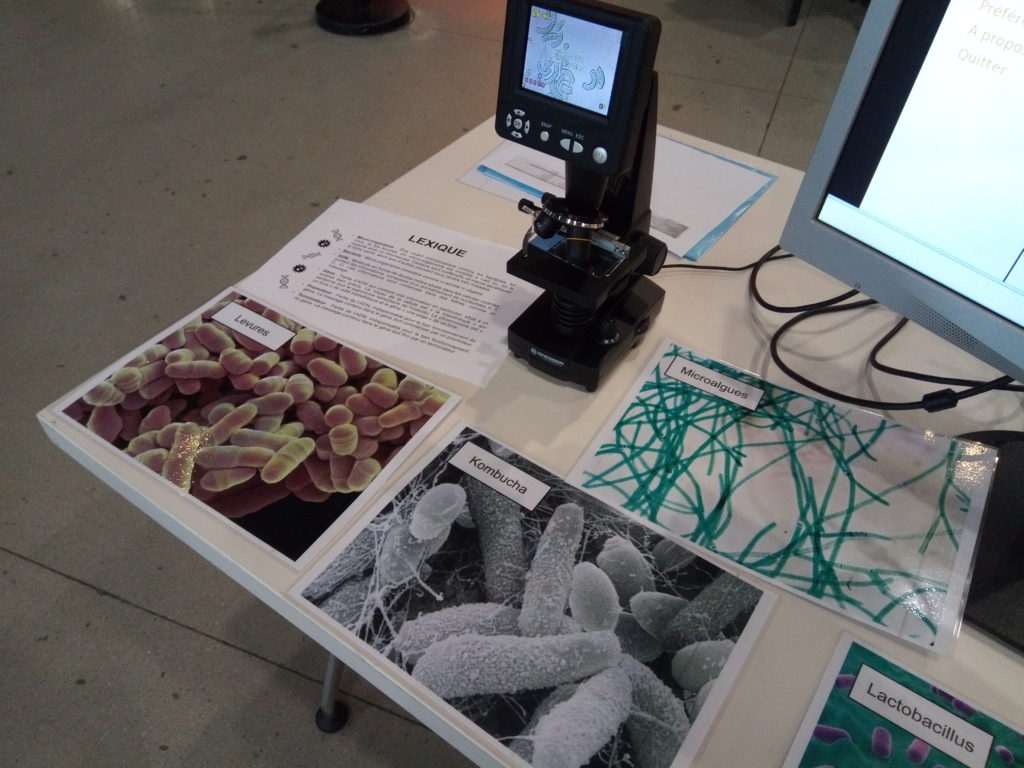 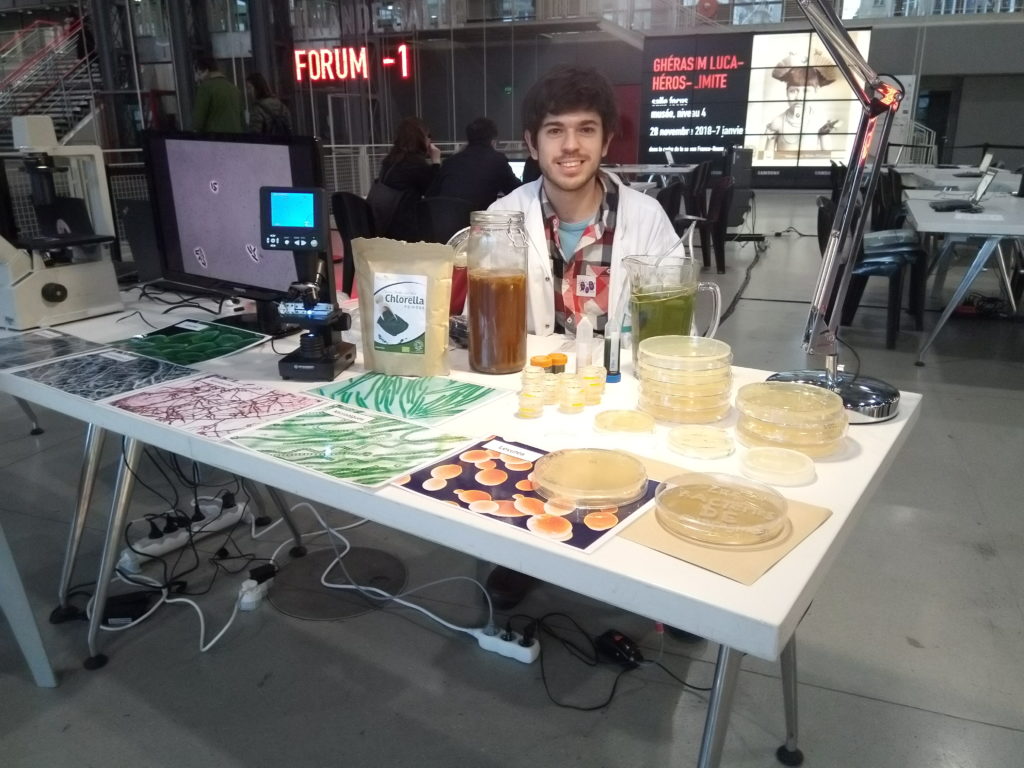 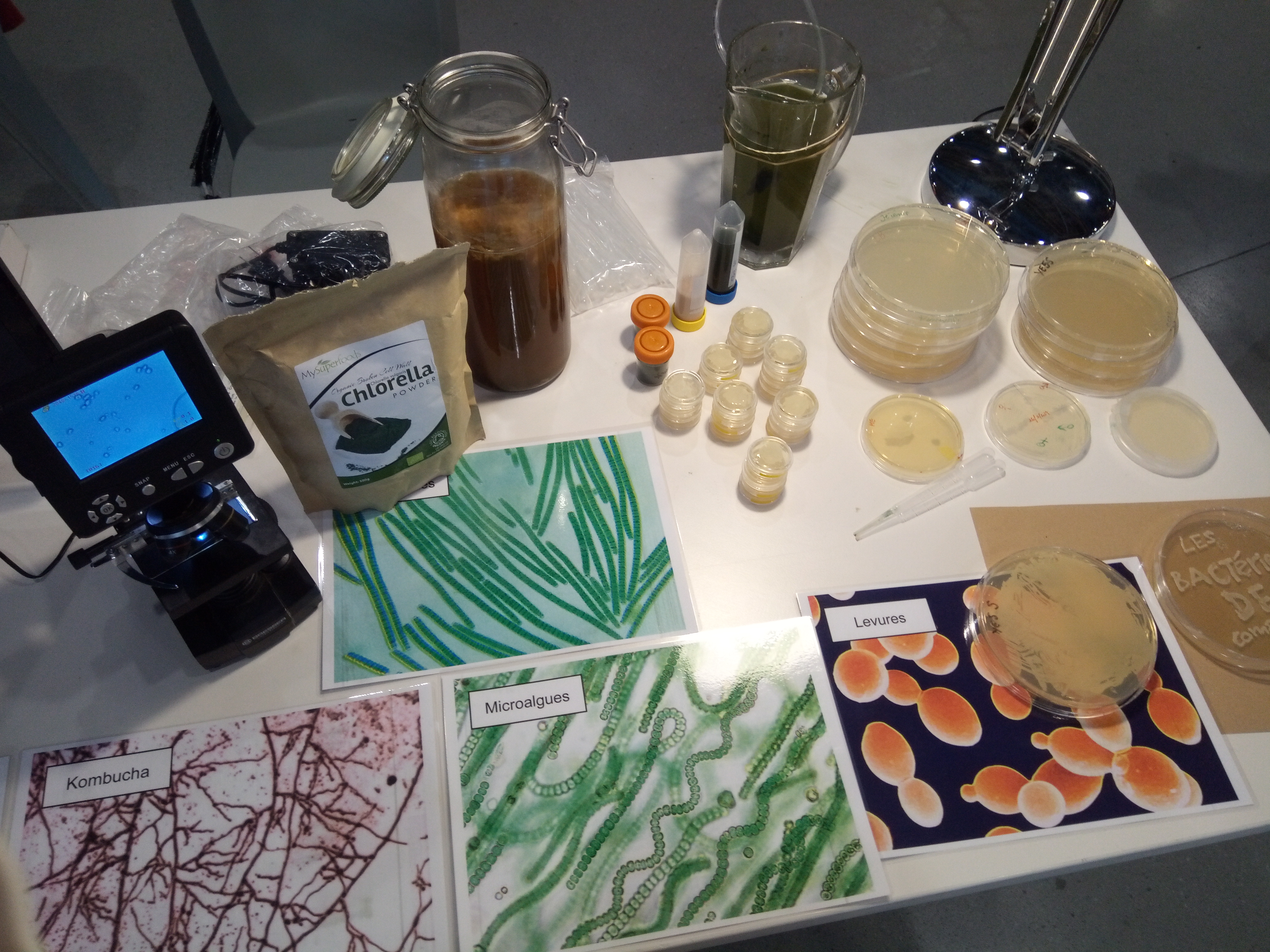 2. Design the DNA of the bacterial pets

After learning about microorganisms, we tell the participants that nowadays we are able to give instructions to bacteria in their own language. The language of bacteria is DNA. Did you know that most of medicines we take when we are sick are made by microorganisms with modifies DNA? Following the example of the vinegar fermentation, we teach the kids that we can instruct microbes to make medicines instead of vinegar for example, or just a flower smell!

At Center Pompidou, we invited the kids to go on and play on the computers the game, in which they are able to design a DNA sequence and modify their own microorganism, to then bring it home in a sticker.

Description of the game

The game is made with the interactive novel python engine RenPy. This is a simple software that allows people to create a story consisting on messages and some basic interaction with the player. The game, which you can download below for MacOS or Windows, teaches you step by step about the basis of DNA design. The game is supported by a glossary sheet on the table, which is available below.

In the game, you will be require to give 4 different inputs: promoter, gene, terminator, and microorganism. The game follows scientific vocabulary and correct terms which can be expanded if you want to develop it further.

The microorganisms available are: Lactobacillus (a genus of bacteria known as probiotics which are specially known to ferment yogurt), baker's yeast or levure de boulanger (Sacchharomyces cerevisiae which is used to ferment bread or beer), microalgae (this is a broader term, which includes photosynthetic bacteria or microscopic plants), black mold or champignon noir (Aspergillus niger used for the industrial production of vitamin C) and kombucha. Kombucha is a ferment that ferments sugared tea, and includes a symbiosis of a yeast such as Saccharomyces cerevisiae, along with a bacterial species such as Gluconacetobacter xylinus to oxidize yeast-produced alcohols to acetic acid (and other acids). All these microorganisms are often used in biotechnology, and can be found in many industrial applications. For example, researchers have used microalgae to produce biofuels, or baker's yeast to produce complex molecules such as drugs against cancer.

The way the DNA parts fit together in the game also has a scientific basis. For example, the promoter is specific for each microorganism. In fact, promoters are often specific for groups of organisms which are related. That means that a promoter that works in a plant would hardly work in yeasts. The structure of promoters in prokaryotes (bacteria) is very different from those in eukaryotes (yeast or plants or mammals). We reflected this in the game making the promoters specific for each microorganism. Promoters often span 100-1000 DNA letters but we have made the examples shorter in the game, like for all the other sequences.

Genes code for a specific function, and can generally be transferred between organisms. We have reflected this in the game making one function per gene, and making all genes available for all the microorganisms. These are the 5 genes available and the inspiration from real genes used in the biotechnology industry:

Inspired by the many blue reporting proteins such as this enzyme that produces indigo from tryptophan. Indigo is the pigment used to stain jeans blue. Link here for a DNA part example.

The most remarkable example of a gene modification product used for medicine is insulin. In 1978, biotechnology firm Genentech used recombinant DNA techniques to produce synthetic “human” insulin in bacteria. Insulin is the first human protein to be manufactured through biotechnology, allowing mass treatment of diabetes. Link here for a DNA part example.

Many genes from flowers are known and can be cloned in yeast or bacteria. Some scents are very expensive and rare, and biotechnology companies are trying to produce some of this rare molecules in microorganisms to reduce the cost. For example this DNA part on the link here sequences for the enzyme R-Linalool Synthase, responsible for lavender scent.

The inspiration from this gene comes from the operon (group of genes) VioABCDE (link to the sequence of DNA here). This produces a purple pigment (violacein) from L-tryptophane ( an aminoacid). Violacein is a pigment naturally produced by the bacteria Chromobacterium violaceumto defect itself from protozoa trying to eat it while living together in the soil.

The final result will only depend from the choice of gene (5 available) and the choice of microorganism (5 available). That means we have 25 possible combinations (5 times 5). However, the experiment will only succeed if the regulatory sequences before (promoter) and after the gene (terminator) are present and correct. The last sequence included in the DNA part is the terminator. Terminators are less specific than promoters, so we have reflected this fact allowing to use any of the 5 available promoter for any gene and microorganism. However, the terminator must be present for the experiment to succeed. 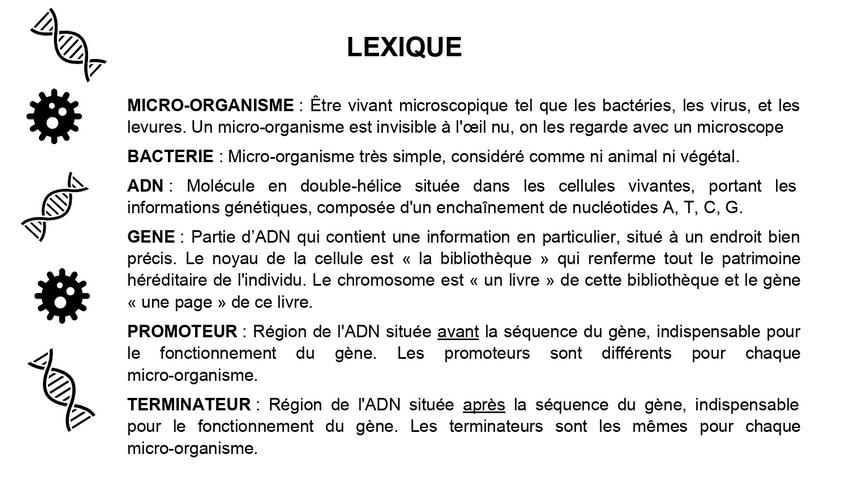 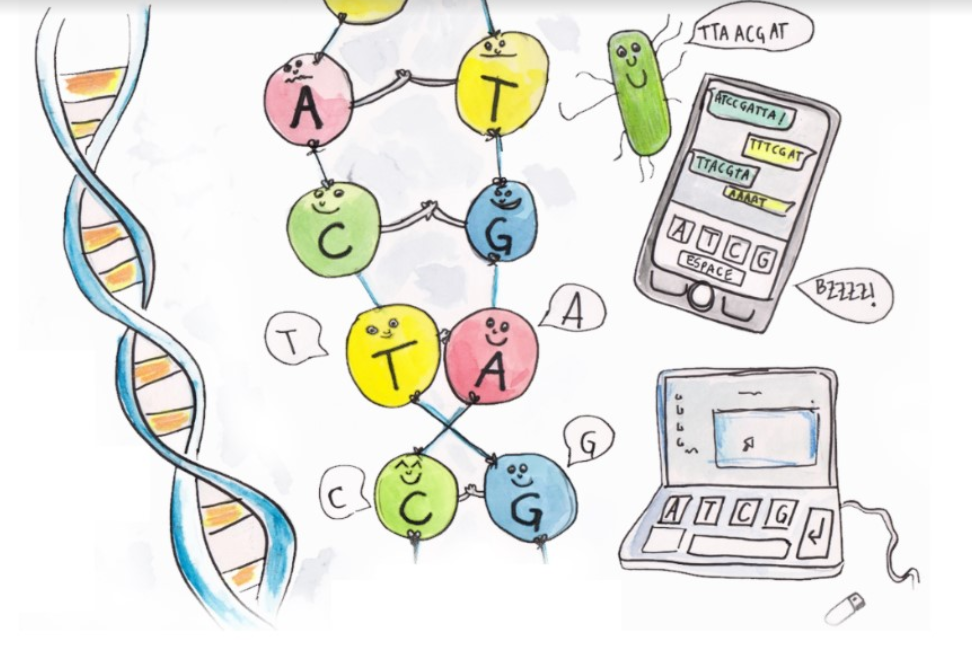 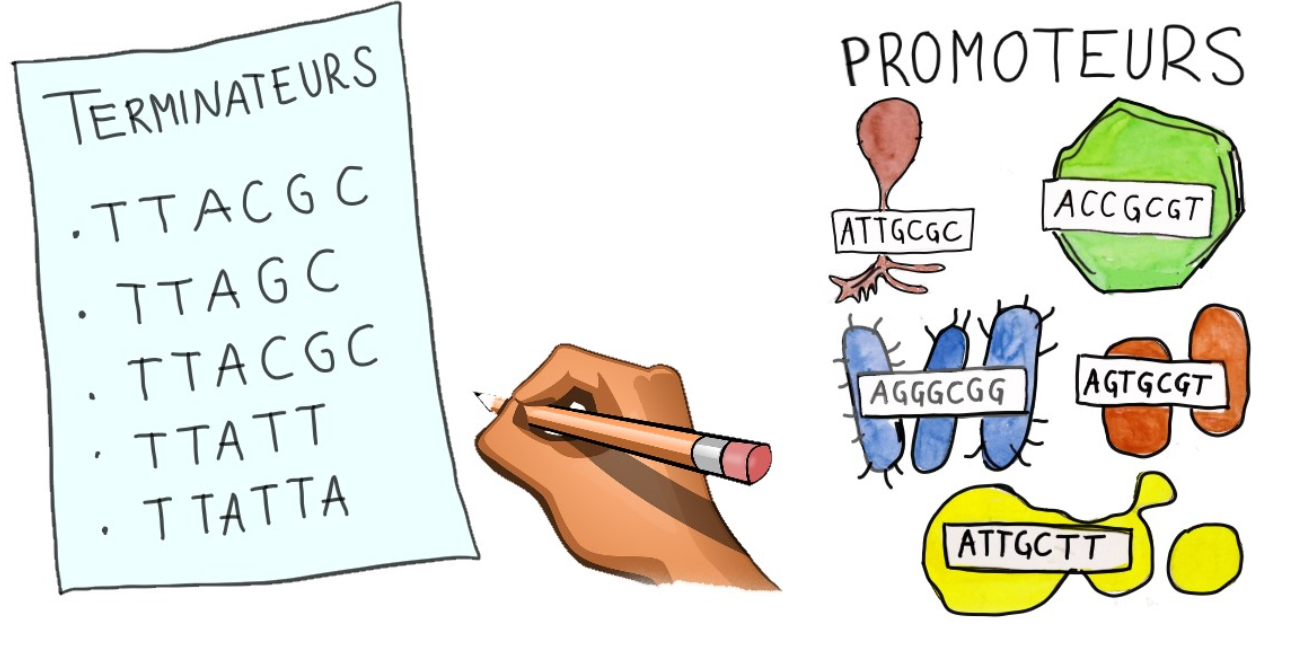 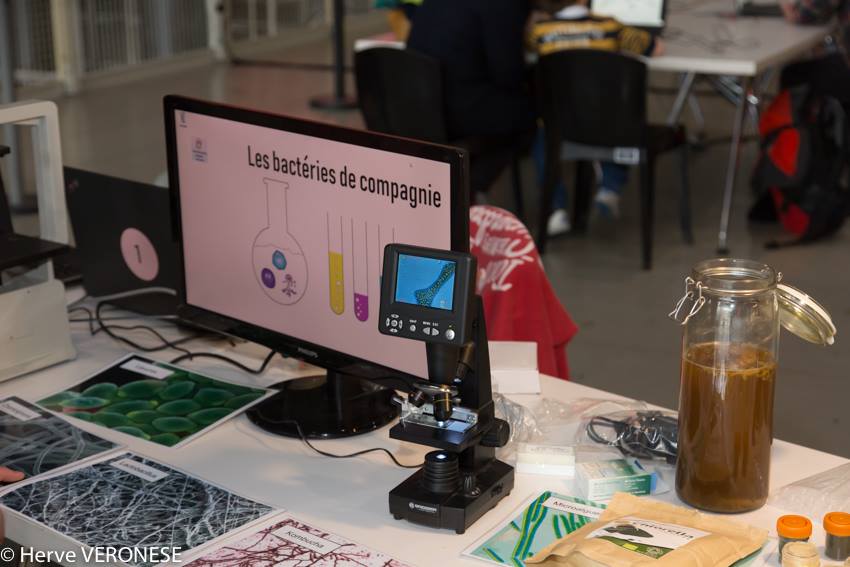 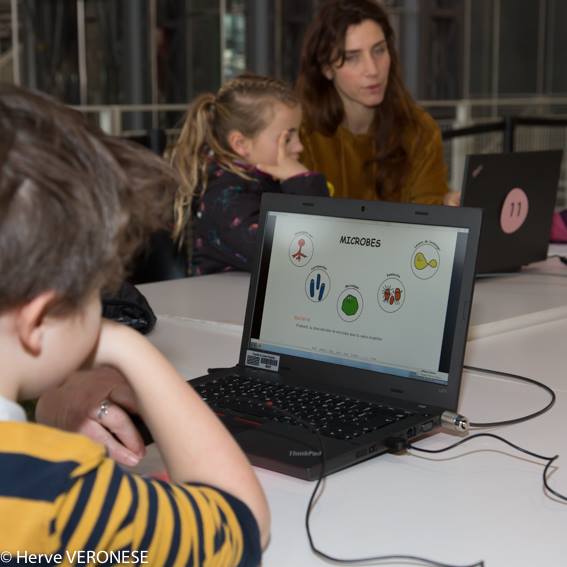 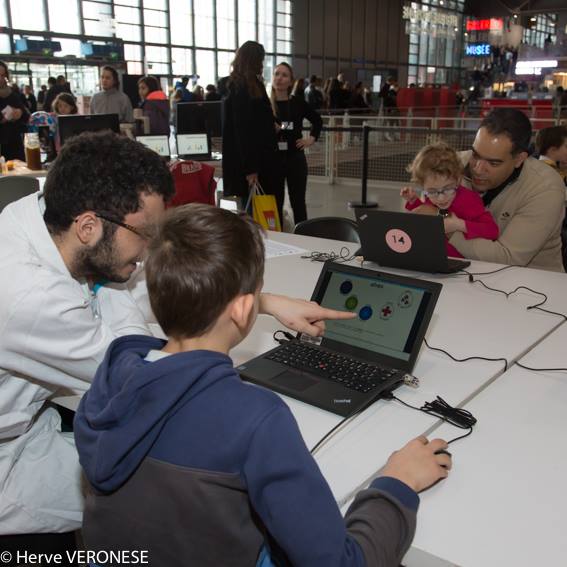 Kids were able to bring their creation home in the form of a sticker!

We printed all 25 combinations and gave them the stickers after the played the game. 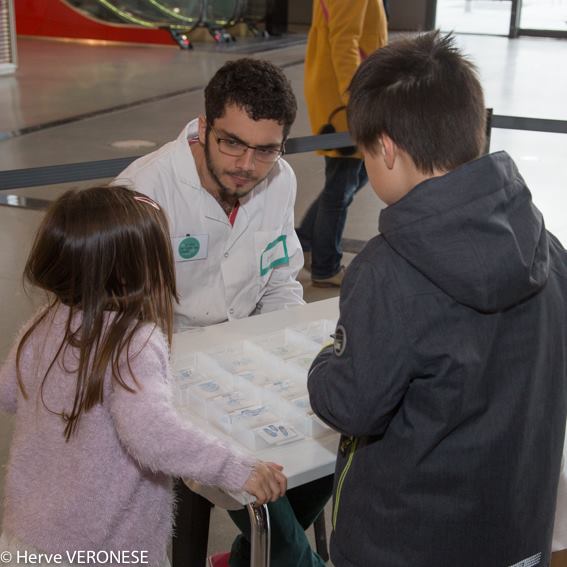 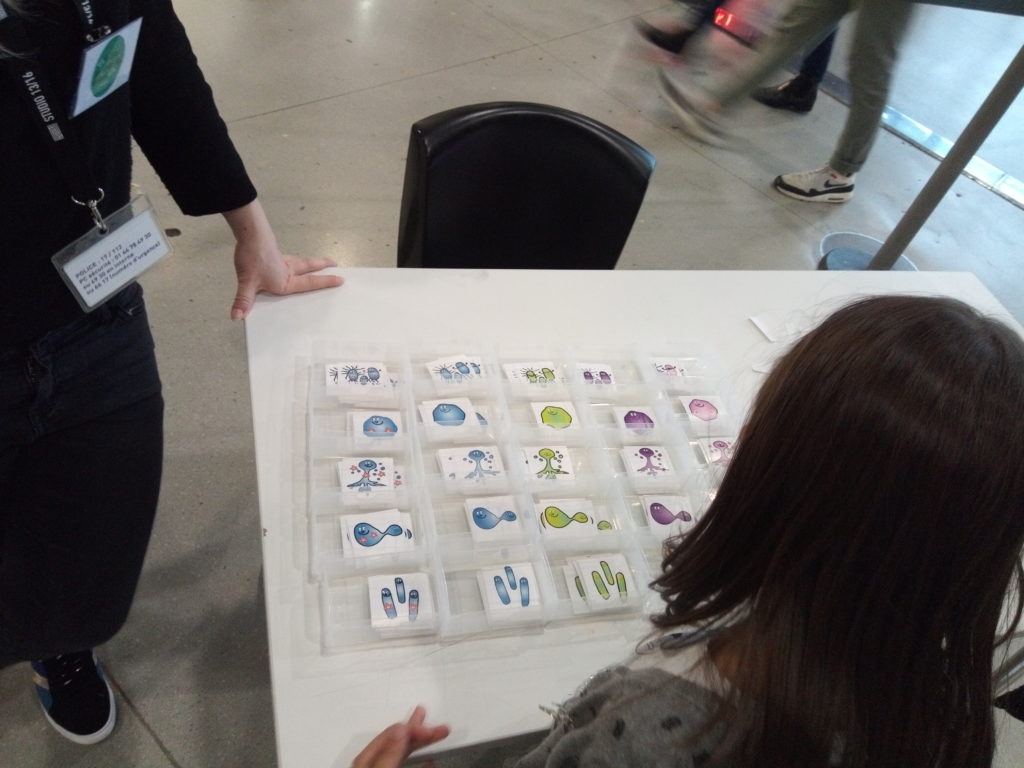 The stickers we created by Juanma Garcia and Fréderic Marin